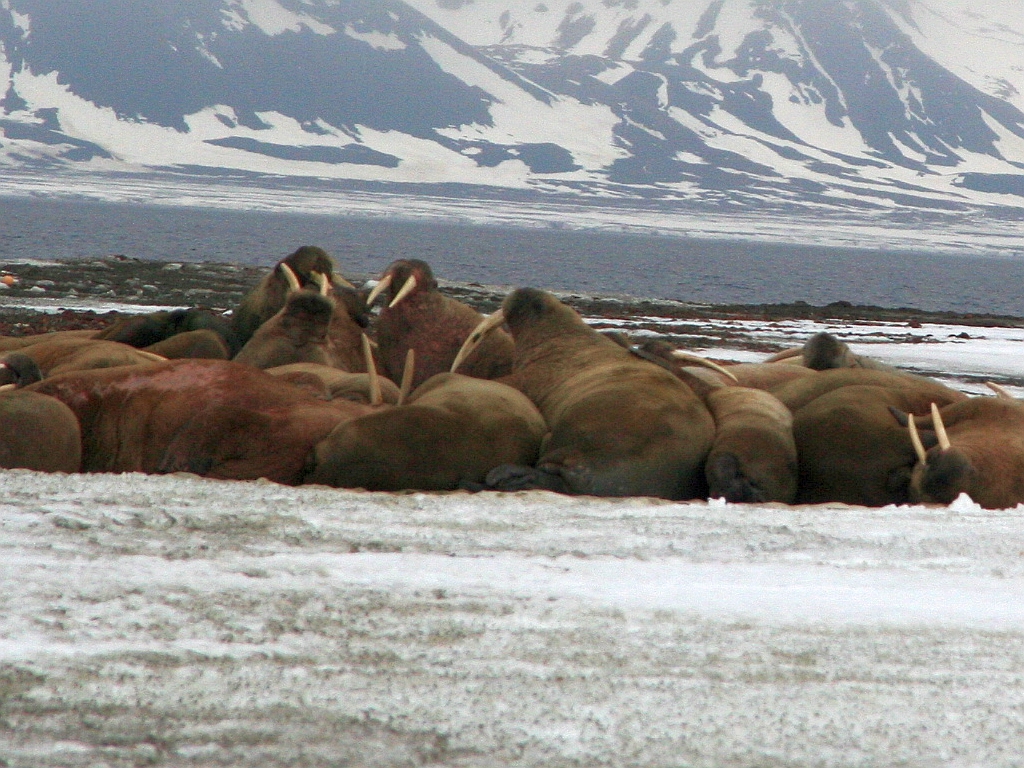 Our holiday started by car (to the station) then the train (to Amsterdam) followed by plane (to Longyearbyen on Spitsbergen). The idea was to go there on a boat for a trip to the north and see polarbears and all the other beautiful things we already saw on the site of Manfred Bartels who had done this trip before and was to join the same trip as us for a third time.
The Noorderlicht is a sailing vessel, not to big so it would be nice to travel with not to much people and enjoy the scenery, animals etc. On Schiphol we already met Joost and Trix and in Longyearbyen in the same Spitsbergen Guesthouse as we, stayed Ellen, Frederik and Cor. We arrived on thursday and on saturday we embarked on the Noorderlicht.

Sunshine, no wind and a lot of animals are the keywords for the trip we have made. We joined the second nord-west trip on the Noorderlicht, and this is our story.
From 4 o’clock on saturday afternoon we arrive on the Noorderlicht. All together we have 10 Dutch, 5 German, 3 English and 1 Australian on board, together with the Dutch crew (4) and the Danish guide. It took some time to know all the names, but we could get along very well with all 24 during the 11 day trip on this sailing ship without sails 😉 Boom and some sails were broken in the storm. Captain Gert didn’t like this, but now we had to do everything on the engine. Special mentioning our cook Menthe, who deserves a michelin star for his three course meals everyday and good lunches and breakfasts. 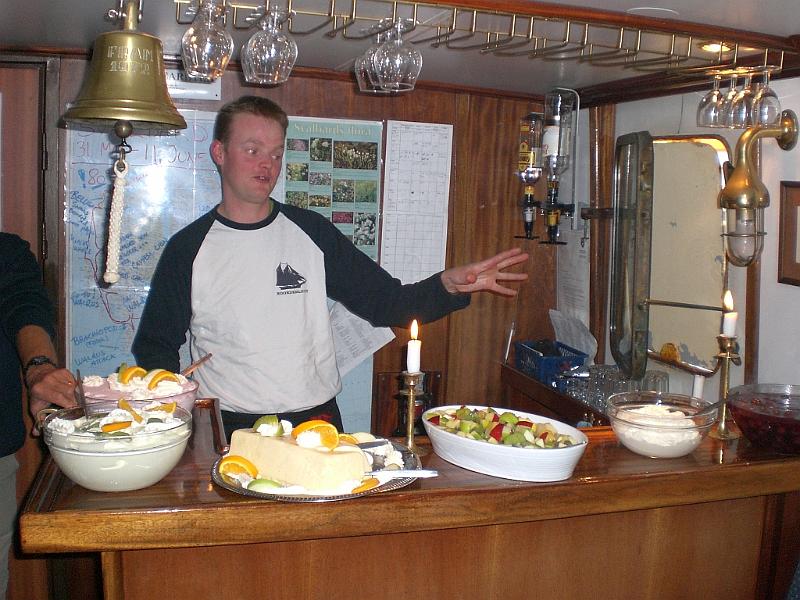 Everyday we did walks with our guide Christian who protected us from polar bears (he carried the rifle at least!). Because of the deep snow it was sometimes difficult but also great fun sliding down the hill. Some of us made very deep holes (more then knee deep) and had to be dug out. Also on the “short” walks, which sometimes took us 5 hours (!), we had wonderful views that made you feel you were at the end of the world.

Most of the time we had good weather. Especially in the north we had a lot of sun. We made it as far as 80 degrees north thanks to Barbara (and Gert) and celebrated this with Berenburg. On our way we saw lots of snowy mountains, glaciers and many (sea)birds. Alltogether 22 species including Ivory gull, puffins, ptarmigan, long tailed skua and arctic skua. And of course the seals (who you can hear “singing” at night in your bunkbed), 3 polar bears (a mother and her 1 year old cub and 1 in his natural habitat, the packice), belugas (a group of about 30), walrus (60 in 2 groups at Poolepynten and several others elsewhere), minke whale. On land we saw the reindeers and arctic foxes. 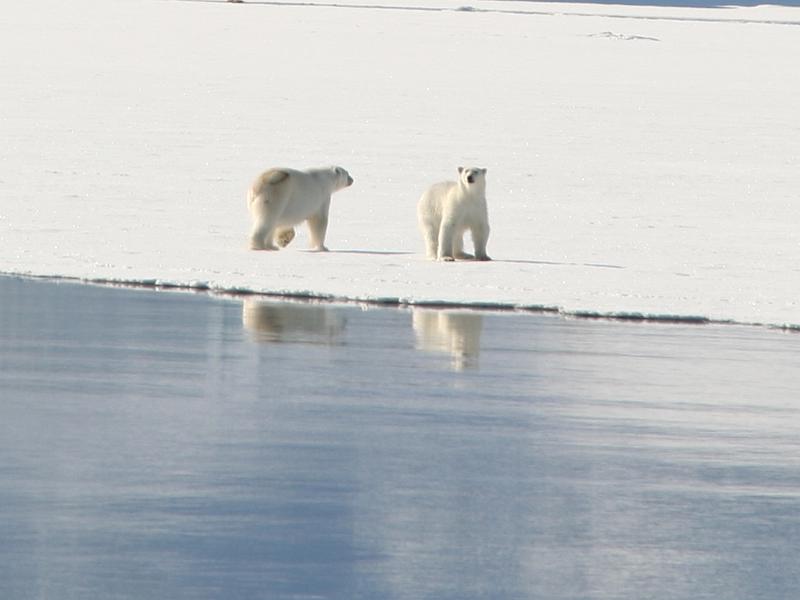 The whole trip we never saw another boat or other people except during our visits to Ny Alesund and Barentsburg. Everyone in our group enjoyed and was enthusiastic about the trip, the friendly, informal crew (not to forget Jeroen our zodiac captain), and we were very lucky with the weather and the animals we saw. Sometimes there was something broken (i.e. no warm water) but everything was fixed by the crew in no time. 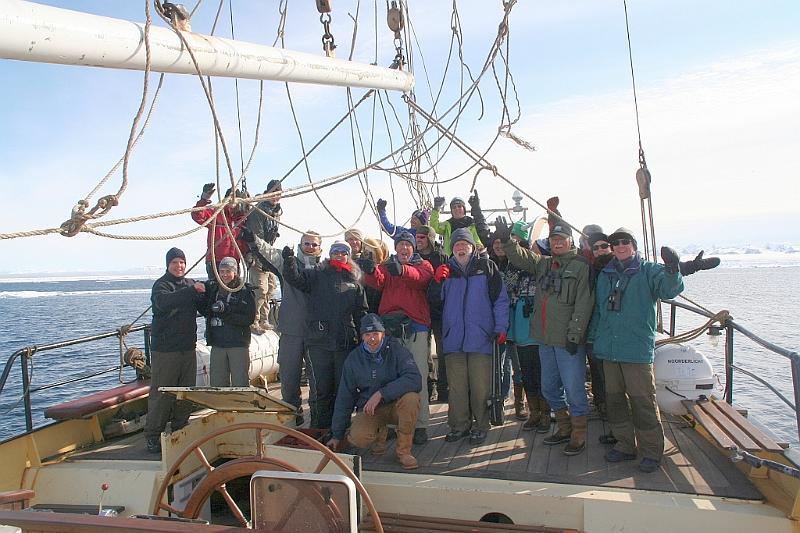 A wonderful experience, worthwhile doing again, but then perhaps as the snow has melted and all the flowers are there. Thanks to the crew, our guide and the other travellers on this trip.

Back in Longyearbyen we stayed a night in the Spitsbergen Hotel and travelled the next day to Oslo and the following day back to Amsterdam.

The trip in pictures